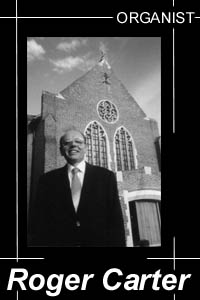 Roger Carter studied with Sylvia Gostelow and Christopher Scarf and later with Richard Popplewell, gaining Fellowships from the Royal College of Organists and Trinity College of Music.

In 1984 he was awarded a Belgian Government Scholarship to study with the late Flor Peters at the Mechelen International Summer School.

Following participation in the Summer Academy in Haarlem in 1988 he was invited by Harald Vogel to take part in a recital on the city's historic organ in the Church of St Bavo.

In 1993 he studied early Italian music on organs of the period in Tuscany with Luigi Ferdinando Tagliavini.

Playing historic instruments has enabled him to pursue his particular interest in the application of idiomatic performing practices.

An unusual assignment some years ago was to provide organ music for "Michelle's graduation ceremony" in an episode of Eastenders!